on July 02, 2007
The world's oldest continuing watchmaker, Vacheron Constantin, also has the singular honor of having produced the single most expensive watch of all time -- the "Kallista" (Greek for "the most wonderful") -- which is set with over 130 carats of emerald cut diamonds, each with its own GIA certificate. The Kallista's original selling price was over $5 million, and today, its value is estimated at over twice that figure should the watch ever be offered at auction.

When a "cabinotier" by the name of Jean-Marc Vacheron established his own company in 1755, little did he know that his decision marked the start of centuries of craft and industrial excellence, the present document reflecting only the latest chapter in an ongoing success story. As the business developed, Jean-Marc Vacheron's heirs had the foresight to bring in a number of able partners and personalities whose character and special talents often proved invaluable. In 1819, for instance, François Constantin joined the company. Enterprising, tireless and always on the move, he crisscrossed Europe for decades, opening new markets and consolidating existing ones, acquiring new customers for the tasteful and ingenious timepieces made in the Geneva workshops of a company that now called itself Vacheron et Constantin. 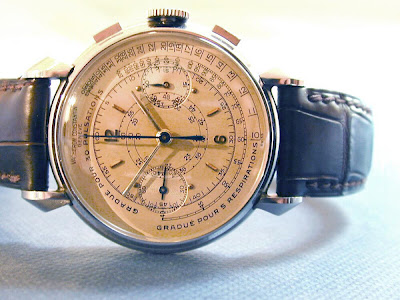 In 1839, Vacheron Constantin was fortunate enough to hire Georges-Auguste Leschot, a mechanical genius whose inventiveness and practical turn of mind served the company well. He was to go down in the history of industrial development as the first to build viable, practical equipment capable of mechanically producing watch parts and components. His work soon revolutionized industry's manufacturing processes and, in short order, even the sale of watches. 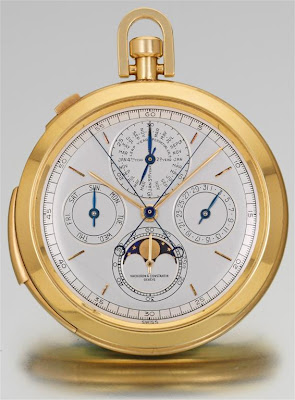 (Made in 1952, it is a magnificent and very rare 18K gold, astronomical, keyless, minute repeating dress watch with perpetual calendar, phases and ages of the moon, split seconds chronograph and progressive 30 minutes register , Ref. 6526 . Vacheron Constantin produced only six examples of this reference numbered 511622 to 511627 this watch being No. 511622. The dial, case and movement are signed. Estimate: SFr 120,000 - 160,000.)

Throughout the 19th century, Vacheron Constantin continued to develop its horological expertise, turning out invariably attractive designs earmarked for a growing number of increasingly distant markets. The period also enabled Vacheron Constantin to forge the principles of product integrity and quality that it has honoured to this day, in keeping with François Constantin's motto: "Do better if possible - and that's always possible". As the century unfolded, the company's production continued to grow, following two basic directions.