on July 15, 2007
Born in the Swiss Jura Mountains in 1833, Jacques LeCoultre was a leading supplier of watch parts and movements to many of the biggest Swiss Watchmakers such as Vacheron, Audemars, IWC, and Patek.

When LeCoultre joined forces with Edmund Jaeger, the company went a whole new direction. They introduced their own line of watches – manufactured completely in-house. And to this day, Jaeger-LeCoultre is one of the few companies in Switzerland that still produces its own movements, cases, dials, hands, and bracelets. Virtually every single component in a Jaeger-LeCoultre watch is hand-finished, produced in-house. 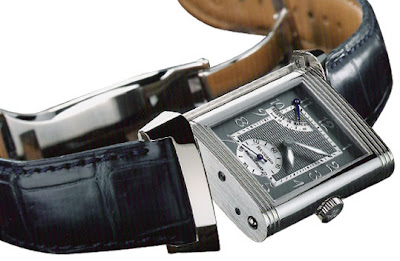 Among the company's special features:
The most noted and distinguishable model for Jaeger LeCoultre is the 'Reverso'. Furthermore, Jaeger recently came out with their 'Master Control' series. These round watches come in a variety of complications. Their size is large compared to the rest of the line, so it really appeals to gentleman looking for something between a Patek and a Breitling. For women, Jaeger has many different Reverse's with numerous diamond combinations.

Jaeger is in the same league on a re-sale basis as AP, Vacheron, and IWC.
http://www.jaeger-lecoultre.com
1833 - Jaeger LeCoultre Richemont