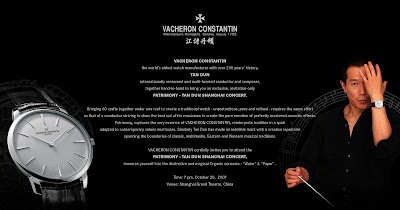 Vacheron Constantin presents Tan Dun's Organic Concertos -
"Water" and "Paper" (by invitation only).
For Tan Dun, water is a metaphor for the unity of the ephemeral and the eternal, the physical and the spiritual, as well as a symbol of renewal, re-creation, and resurrection. The use of a "Water-Instruments-Orchestra" is musical metaphysics, a powerful musical drama of Tan Dun's personal music journey. The metaphor is thus not limited to the water instruments. Rather, the expanded color and sound of the orchestra are driven by the water, but also spiritually inspired. In Tan Dun's Concerto for Water Percussion and Orchestra, one hears sounds central to the nature in which we live, but have too long not listened.

Many instruments made for this piece, including the hemispherical transparent water basins which Tan Dun discovered in 1990, are hallmarks of Tan's longtime experimental voice and art installations: Jo-Ha-Kyu (1992), American Dream (1993), Ghost Opera (1995), The Gate (1999), and Water Passion after St. Matthew (2000). 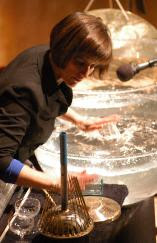 Among the other water instruments used in this work are water bottles, water tubes with foam paddles, water shakers, water drums (floating wooden salad bowls), water gong, water agogo bells, slinkyphone (the toy for children, with styrofoam attached to one end), and waterphone. In addition to the percussive sounds created by instruments agitating water, the present water instruments can play a chromatic melody. For example, in the opening of the second movement, the soloist plays the same melody as the cello by using pitch bending in the water gong.

This concerto is unique, in the way that Tan has put all the various forces in one piece. It is "alive," an ongoing work, especially in the cadenza sections, where the soloist improvises freely, never doing the same thing twice. This reflects Tan Dun's musical experiences in Taoist ritual, when he was a wild, barefoot "mountain boy" in his grandmother's village in the Chinese province of Hunan.

~~~~~~~~~~~~~~~~~~~~~~~~~~~~~
Concerto for Water Percussion and Orchestra - In Memory of Toru Takemitsu was commissioned by the New York Philharmonic for Kurt Masur and percussionist Christopher Lamb, and received its world premiere at Lincoln Center on June 3rd, 1999. 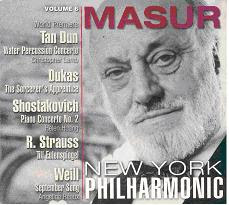