on October 09, 2007
Bulova is a New York based corporation making watches and clocks.

It was founded and incorporated as the J. Bulova Company in 1875 by Joseph Bulova (1851-1936), an immigrant from Bohemia. It was reincorporated under the name Bulova Watch Company in 1923, and became part of the Loews Corporation in 1979. His name is possibly related to Bulawa, a Polish word for a type of mace.

Bulova established its operations in Woodside, New York and Flushing, New York, where it made innovations in watchmaking, and developed a number of watchmaking tools. It is famous for a number of horological innovations, perhaps most notably the Accutron watch which used resonating tuning forks as a means of regulating the time keeping function. In July 1941 they paid $9 for the first television commercial, a 10-second spot on WNBT during a baseball game between the Brooklyn Dodgers and Philadelphia Phillies.

The Joseph Bulova School of Watchmaking was founded in 1945 by Arde Bulova, Chairman of the Board, initially to provide training for disabled veterans after the Second World War. The tuning fork is between the two electromagnetic coils at the top of the watch, which in turn drive it. 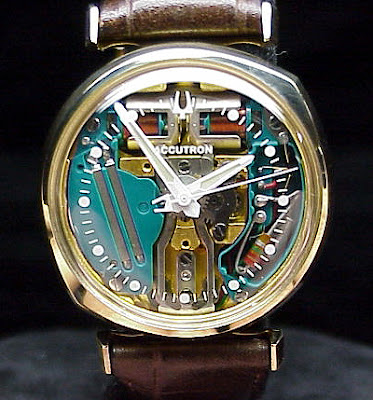 (Bulova Accutron Spaceview 1961. This is a magnificent 1960 Model 214 Accutron Spaceview. Collectors have coined it the "Floppy Football" for pretty obvious reasons. Sporting a handsome Gilt Movement, and flawless White Luminous Hands, this watch is keeping perfect time. It also features a tuning fork sweep second hand and authentic crystal. The first year of Accutron production to the public was 1960, so this is an incredible collectible find. Very few "first-year" models are still available and even fewer in this "mint" condition. This Spaceview has been outfitted with Bulova's Teju Lizard strap with Tuning Fork Logo Emblem. This is an absolute MUST for the true Accutron Collector!)

"Accutron" tuning fork watches, first sold in October 1960 by Bulova, use a 360 hertz tuning fork to drive a mechanical gear train. The inventor, Max Hetzel, was born in Basel, Switzerland, and joined the Bulova Watch Company of Bienne, Switzerland, in 1948. This outstanding engineer was the first one to use an electronic device, a transistor, in a wrist watch. Thus, Max Hetzel developed the first watch in the world that truly deserved the qualification "electronic": the world-famous "Bulova Accutron". More than 4 million were sold until production stopped in 1977. 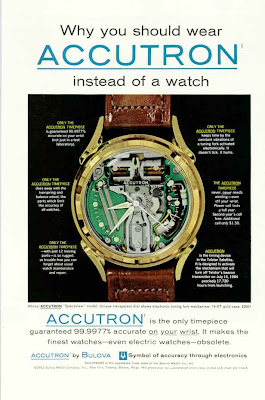 They also were subjects of the other famous space era rivalry with Omega Watches for being the first watch on the moon. Ultimately, the Omega Speedmaster Professional chronograph wristwatch (known as the "Moon watch") was designated by NASA for use by the astronauts in all manned space missions, becoming the first watch on the moon on the wrist of Edwin 'Buzz' Aldrin.

However, all instrument panel clocks and time-keeping mechanisms in the spacecraft on those missions were Bulova Accutrons with tuning fork movements, because at the time, NASA did not know how well a mechanical movement would work in zero gravity conditions. The Bulova company currently manufactures a limited edition "Astronaut" model under its Accutron line of watches. The back of the watch case is autographed by Buzz Aldrin. Ironically for a company which once touted its tuning fork technology as a major advance over traditional mechanical timepieces, the current Astronaut model features automatic ETA SA movement, making it far more similar to the rival Omega.