on October 16, 2007
The art of creating highly complicated watches has always been mastered by only a few. With a strong focus on high utility value complications, Glashütte Original starts making complicated timepieces in 1845.

Glashütte, a word originally means "the mine where the shiny metal came from", fell into a great poverty after its silver reserves died out from almost four centuries of mining. Ferdinand Adolph Lange (1815-1875), a master watchmaker to the Saxon court, had brought a new hope to the town by founding the first watch manufactory. 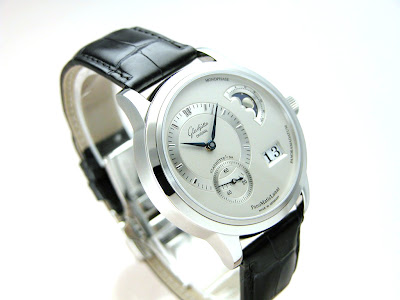 In the meantime, master watchmakers of the region, Ferdiand A. Lange, Julius Assmann, Ludwig Strasser, Johannes Durrstein, Adolf Schneider, Strasser & Rohde, and Ernst Kassiske were awarded for various gold models at the world exhibitions and international competitions, and thus the foundation and the reputation of the Glashütte watchmaking industry had been created.

In the beginning of World War II, the watch manufactories in Glashütte was still in the production of military watches for the Navy and Air Force. Later, in the last day of War World II, Glashütte was bombed from the sky and the factories were badly destroyed. The reminding unaffected factories merged and found the VEB Glashütte Uhrenbetriebe under the rule of East German State.

After the reunification of Germany in 1990, The VEB Glashütte was transformed into the Glashütte Uhrenbetrieb GmbH. The skillful master watchmakers remained, and the company, then, was transformed to a global enterprise from the state-owned company.

Today, the new name of the company is Glashütte Original, but it is still carrying the old tradition of Glashütte watchmaking for more than 150 years.