on October 20, 2007
Minute repeater is a complication found in a mechanical watch, in which the time is chimed to the nearest minute. 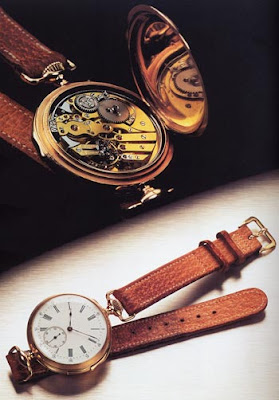 Here "dong" corresponds to 1 hour, "ding-dong" corresponds to 15 minutes, and "ding" corresponds to 1 minute. Often, repeating watches are activated by moving a slide located on the side of the case. Doing this winds a subsidiary spring, and allows various levers in the repeating mechanism to fall onto cams that turn with the watch hands. When the button is released, the spring moves the levers back to where they started from. As the levers move, they engage with hammers that hit gongs, thus striking the time.
0000 - The World First Creation 1825 - Omega 1875 - Audemars Piguet Minute Repeater