on October 21, 2007
A watch is said to be "simple" when it indicates hours, minutes and seconds. Following this definition, a watch equipped with an automatic mechanical movement, indicating only these functions, would also be considered as a "simple" watch. 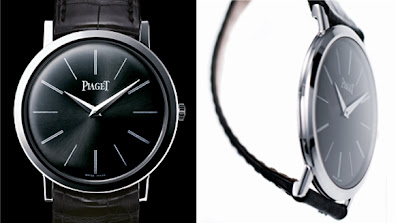 The same definition applies for a very precise chronometer which indicates the time with a very high degree of accuracy, even though this particular timepiece has been subjected to a series of very stringent tests by the Chronometric Observatory or another official chronometric testing facility.

While sometimes people confuse a chronometer and a chronograph, these two timekeepers are not at all the same. Here are the definitions.

Chronometer - A watch which has its own "movement" undergone a series of precision tests in an official institute. The requirements are very severe, e.g. a few seconds per day in the most unfavourable temperature conditions and positions that are ordinarily encountered. If the watch "movement" has passed these tests, it will be awarded with an official certificate verifying its ability to maintain accurate time in various positions. The definition of a chronometer was formulated by Contrôle Officiel Suisse des Chronomètres in 1951.

Chronograph - A watch or any apparatus with two independent time systems: one indicates the time of day, and the other measures brief intervals of time. Counters registering seconds, minutes and hours can be started and stopped as desired. It is therefore possible to measure the exact duration of a phenomenon. The term chronograph is often confused with the similar but very different term, 'chronometer'. Chronographs generally have a start/stop pusher and reset pusher. One touch of the start/stop pusher activates the (usually) separate chronograph hand. A second touch of the start/stop pusher stops the chronograph. Many chronographs usually measure durations as long as 12 hours, 29 minutes and 59 seconds.

A watch is said to be "complicated" when it indicates functions in addition to the time. These may include optical readings using hands or windows, or they may be acoustical in nature, using chimes or bells. 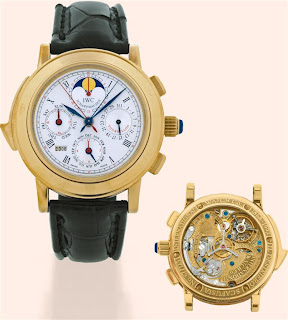 In 1993, IWC celebrated its 125th anniversary of innovative watch making in Schaffhausen Switzerland with the release of one of the world's most complicated wristwatch: the "IL Destriero Scafusia". "Il Destriero Scafusia" ref. 1868 from 1993 is a wrist watch with 21 complications using 750 individual parts. Its perpetual calendar will display the day, date, month, year, leap year and century correctly until year 2499. The moon phase display is the most exact ever made, needing a one-day adjustment in 2115.

A "grand complication" is a watch that contains at least three "complications", coming from each of the groups listed below.