on November 17, 2007
Since its founding in 1881 by 19-year old entrepreneur Achille Ditesheim in the village of La Chaux-de-Fonds, Switzerland, Movado has achieved a legacy of design innovation, earning more than 100 patents and 200 international awards for artistry and innovation in watch design and time technology. 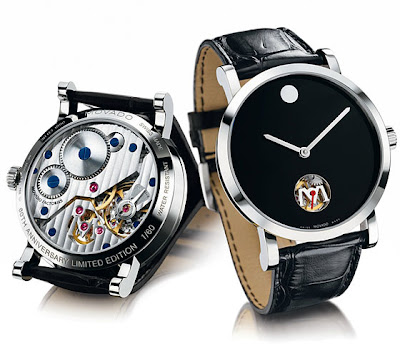 The brand is celebrating the 60th anniversary of the iconic. It was the most famous movement Movado ever created. It was designed by artist Nathan George Horwitt in 1947 and was defined by a single dot at 12 o’clock, which symbolizes the sun at high noon. The dial of this watch reflects a purity of design unrivaled in the history of time-keeping. In 1962, the dial design was registered as a trademark.
Movado, meaning "always in motion" in the international language of Esperanto, is the hallmark of some of the most famous timepieces ever created:
Defined by a single dot at 12 representing the sun at high noon, the Museum Watch dial is regarded as an icon of Modernism. It was designed by Bauhaus-influenced artist Nathan George Horwitt in 1947. When Horwitt's dial was selected for the permanent collection of the Museum of Modern Art, New York, in 1960, it was the first watch dial ever awarded this distinction.

The name "Museum Watch" derives from this recognition.

1969 • ZENITH became a member of the MONDIA-ZENITH-MOVADO holding company.

1971 • The American ZENITH RADIO CORPORATION took a majority stake in the MONDIA-ZENITH-MOVADO group.

1978 • ZENITH returned to the hands of Swiss investors, with DIXI, the financial and mechanical constructions group, as major shareholder.