Waterman was established by Lewis Edson Waterman in New York in 1884 (but, not in Paris).

In 1883, Waterman was an insurance broker in New York City, getting ready to sign one of his hottest contracts. In honor of the occasion, he bought a new fountain pen that he considered much more stylish than the dip pen and ink well. To Waterman's frustration the pen broke and spilled ink all over the contract. Waterman then rushed back to his office to get another contract, but by the time he got back another broker had closed the deal.

After his humiliating contract signing, Waterman then strove to make better fountain pens in his brother, Frank Waterman's, work shop. He used the capillarity principle which allowed air to induce a steady and even flow of ink. Waterman got a patent for his new fountain pens in 1884.

As the 20th century wore on, Waterman's conservatism allowed its younger and more innovative competitors, i.e. Parker, and Sheaffer, etc to win more and more market share. By the later 1920s, Waterman was playing catch-up, and it continued to struggle through and beyond World War II. In 1954, it shut down. 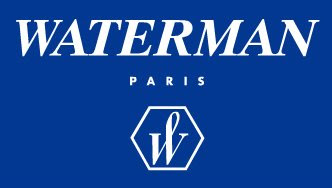 Luckily, Waterman's French subsidiary, Waterman Jif (later Waterman S.A.) continued to prosper, even through the parent company's hard times, and eventually absorbed what remained of the American company and its British arm.