Air India
Based in Mumbai since 1932 (as Tata Airlines), Air India is the 16th largest airline in Asia. Running 159 aeroplanes, serving 25 destinations worldwide, and with its affiliated carriers, Air India serves over 100 cities. In 2010, Air India is expected to join Star Alliance, the world's largest airline alliance.

Jet Airway
Operating 85 aeroplanes (plus 44 on orders), Jet Airways is an airline based in Mumbai since 1993. It is India's second largest airline after Air India. Also, it is the market leader in domestic sector.

In July 2008, Which? magazine ranked Jet Airways as the world's best long-haul airline after Singapore Airlines.

At the moment, Jet Airways operates over 400 daily flights across 65 cities in 25 countries worldwide.

Cathay Pacific
Founded in 1946, Cathay Pacific is the flagship carrier of Hong Kong. Its headquarters and main hub is based in Hong Kong International Airport, Hong Kong.

Including the Cargo Fleet, Cathay Pacific operates 126 (+32 on orders) aeroplanes to 114 destinations in 36 countries worldwide

In 2008, Cathay Pacific and Dragonair operated 138,000 flights, carrying nearly 25 million passengers and over 1.6 million tonnes of cargo and mail. 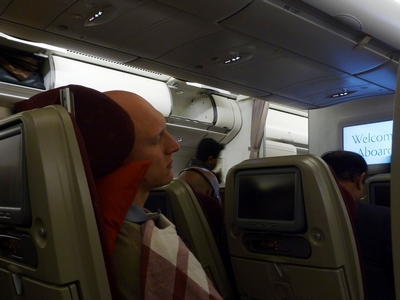 Unless you've got an urgent meeting in the next day or you prefer not to take a whole day-off at the office, I do recommend you to go for Jet Airways. Personally, I hate to fly at wee hours or to be stuck in heavy traffic after landing.